A recent meditation study out of California has recently garnered significant publicity.

I will take this example as an opportunity to comment on media coverage of current brain research. It should be no surprise to anyone that the brain is the most complex organs in the body, and the most difficult to understand. Despite the frequent headlines about scientific advances, researchers have only a relatively primitive understanding of how the brain works. 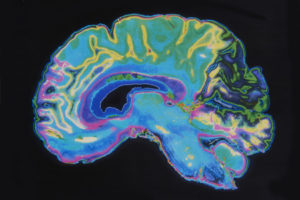 Some areas are well understood as very important to, say, breathing or balance. However, much “higher-order” cognitive functioning is very difficult to pin down in the brain. For example, long term memory does not appear to be localized to one part of the brain; rather, your brain uses many different locations in the supremely complex task of storing long-term memory. It is also important to note that many aspects of brain functioning are not localized to one patch of gray matter. Research has revealed that many aspects of our cognitive functioning make use of “circuits” in the brain comprised of nerve cells reaching from one end of the brain to the other.

In the study described above, researchers at UCLA did two studies on emotional processing in the brain. They used functional magnetic resonance imaging (fMRI) to study which parts of the brain were more active during separate tasks. This method of studying the brain is one of the most complex and accurate methods currently available. One of their reported results was that people who were more “mindful” displayed different brain functioning than those who were not. Here the word “mindful” presumably refers to those traits that are associated with long-term experience with meditation. One result the researchers found was that people who were more mindful displayed more of the brain patterns found in people who are good at “putting feelings into words.” This result may be partly explained by the fact that a tendency to label one’s emotions is often included in descriptions of mindfulness. However, it is possible that this study illuminates an important difference in brain functioning between people who are mindful and those who are not.

We should beware the headlines that often accompany articles like this one. The above URL links to an article whose headline reads, “Brain Scans Reveal Why Meditation Works.” On one hand, this seems like a gross exaggeration. The uninformed reader may glance at this and conclude, “Hey, how about that, those scientists cracked another mystery. Case closed.” However there is much about meditation and much about the brain that is poorly understood by scientists. The recent trend to explain the subjective and objective effects of meditation in terms of neurobiological functioning is a welcome one, to this writer, but we have a long way to go before the mysteries of “why meditation works” can be considered “cracked.”