What is cognitive processing therapy? 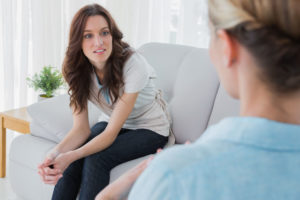 Cognitive processing therapy (CPT) is a type of cognitive-behavioral therapy (CBT) that was developed by psychologists in the Department of Veterans Affairs. It was specifically designed to help people suffering from posttraumatic stress disorder (PTSD), which may arise after someone experiences a traumatic event. PTSD can include symptoms such as nightmares, depression, flashbacks, panic attacks, avoidance, intrusive thoughts, exaggerated startle response, and feeling constantly “on alert.”

CPT helps address the ways in which a traumatic event affects our beliefs about many aspects of our lives, including (but not limited to) trust, relationships, safety, and self-esteem. The effects of trauma on self-esteem can be especially devastating. This is especially true for survivors of childhood trauma.

CPT was recently rated by the American Psychological Association (APA) as a first-line treatment for PTSD. The APA’s treatment guidelines for PTSD recommend CPT more highly than medication. CPT has also been the subject of recent media attention, thanks to a wonderful, in-depth report by National Public Radio journalist Jaime Lowe who described her own experience with CPT on a recent podcast.

What Are the Unique Challenges of PTSD?

The problems that people suffer after a traumatic event present difficulties that are not usually seen with other mental health issues. Many people with PTSD are neither aware that they have the condition, nor that there are effective treatments available. It’s not uncommon to receive explicit or implicit feedback from loved ones that “it will pass” or “you’ve just gotta tough it out.”

For some, the messages we tell ourselves are more damaging than anything we hear from others. For example, I just need to get over it, or that’s in the past, why is it so hard for me to just move on? There must be something wrong with me are common attitudes especially around past traumatic events, especially those that happened years ago.

To treat PTSD, we need to change our thinking about the traumatic event. That’s where CPT comes in.

At a basic level, cognitive processing therapy is based on the idea that what we think affects how we feel. After a traumatic event, sometimes our thinking changes. This can happen because we’re trying to cope with the traumatic event or because we’re striving to keep ourselves safe in the future. For example, after surviving a major car accident someone might begin thinking:  most other drivers are maniacs. This change in thinking would help them feel safer on the roads because it would lead them to drive much more defensively.

CPT can help us learn to think differently about — or reprocess — a traumatic event, even if that event occurred many years ago. For people with PTSD, it can be very difficult to talk about or think about the traumatic event(s) that changed our lives. It can be even harder to challenge long-held assumptions we’ve had about these events. CPT helps us do exactly that in structured and focused ways that are proven to reduce the severity of PTSD.

What is the Role of Self-Blame in PTSD?

Self-blame is a way of thinking that can feel useful after a traumatic event; it can help us feel like we have control over what happens to us. Unfortunately, if we blame ourselves for a traumatic event, this thinking can increase the symptoms of PTSD. It can block our natural capacity for healing after a terrible event.

Consider an example of a woman who was with her sister when the sister drowned. If the woman believes that the drowning was caused by unusually strong currents that day, she would feel intense grief at the loss of her sister, but probably would not develop PTSD. But, if the woman believes if only I had gone into the water with my sister, she wouldn’t have drowned, then she is more likely to develop PTSD.

Some types of traumatic events tend to cause more self-blame than others. For example, survivors of sexual assault may blame themselves for the event because of the personal nature of the crime and because, often, the victim knew the perpetrator before the assault happened.

Abuse or assault that happens during childhood frequently leads to subtle but impactful forms of self-blame. This is because children frequently assume that positive or negative events happen because of something the child did or because of a quality the child possesses. As we become adults, we typically do not reexamine these memories because they are painful to think about. As a result, the self-blame persists.

Self-blame can play a strong role in keeping us stuck in PTSD. Reducing or eliminating self-blame is often a focus in CPT.

Is Cognitive Processing Therapy (CPT) a “Cure” for PTSD?

For some people, CPT can indeed cure PTSD. This doesn’t mean that the traumatic event is forgotten, but that the memory of the event no longer causes significant impairment for the person who endured it.

Research shows that most people who complete a course of CPT do experience a significant reduction in PTSD symptoms. For some, the therapy helps them overcome PTSD entirely. Others continue to have PTSD after treatment, but to a lesser degree. CPT is typically delivered in twelve sessions, although sometimes it needs to be adapted to particular situations which can alter the number of sessions.

A certain amount of commitment is necessary to complete the treatment — it is not an easy process to undertake. Some people with PTSD find it difficult to get through the sessions or to do the homework that is a critical part of CPT. It is unlikely that CPT will be helpful without completing all of the sessions and doing the homework exercises. This is because the exercises ask the client to practice examining thoughts and emotions in specific ways that have been shown to reduce the symptoms of PTSD. Don’t be fooled by the word “homework” though! CPT feels much more like therapy than like an academic class.

What Other PTSD Treatment Options Are Available?

Cognitive processing therapy is certainly not the only treatment available for people with PTSD, and there are several good options that do not involve medication. There are many therapies that claim to treat trauma, but most of these have not proven to be effective. Fortunately, several types of therapy for PTSD do have substantial research support. Medication can be part of a comprehensive treatment plan for PTSD, but it is not necessary for everyone.

People suffering after a traumatic event are often told that they “should talk to someone.” To be clear, effective treatment for PTSD is much more than this. It is a popular myth that simply talking about one’s experiences will be sufficient to overcome PTSD. That’s the bad news. The good news is that there are now therapies specifically tailored to people with PTSD—and they work!

How Do I Find a CPT Therapist Near Me?

To find a therapist in your area, feel free to use the find-a-therapist directory from the Association for Behavioral and Cognitive Therapies (ABCT), or this clinical directory of CPT providers, or contact us at info@manhattanCBT.com.